a) Carolina Wren Nest Boxes- These are already in place at selected SLUs, such as the  Interfaith House, and the Citizens of the World House, and boxes were built and installed in 2014. Today, these boxes still remain where they were installed, and require being cleaned out each year in the summer, and any other maintenance would involve the wear and tear of the boxes, and these responsibilities will remain on the shoulders of the SLUs that house them. 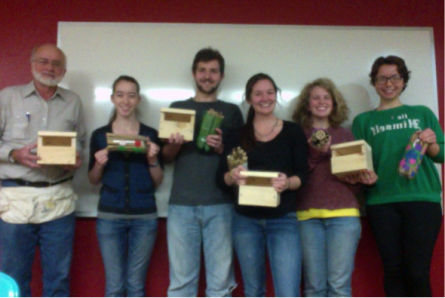 b) Chimney Swift Towers- This is a project that is still being worked out, and now that there is a price estimate the project can move forward as soon as the proper funding has been raised. The project consists of the construction of a single tower near the residential side, Stuyvesant Hall and the old observatory. The tower itself would have something along the lines of a rain garden beneath it to collect and purify the runoff, and maintenance involved here would be minimum because the birds would reuse the tower for nesting for five consecutive years.

c) Bird Feeders- The plan for bird feeders on campus has already been implemented, however, there are plans for the implementation of more bird feeders in the future. As for the ones that are currently in place, they can be found outside of the science center, and outside of the drama center near the library. There is some maintenance required with the bird feeders such as, general wear and tear, replacement parts, and cleaning to ensure that there are no bees or hornets nesting in the feeders. As of now there is no place on OWUs campus to house the bird seed, and this is something that, Dick Tuttle, has to bring to campus to restock the feeders himself, so there is an opportunity for a future proposal for a storage site on campus for these seeds.

d) Blue Bird Nest Boxes- Proposal for the addition of these Blue Bird nest boxes is still in progress. Potential maintenance would coincide with the maintenance associated with the Carolina Wren boxes.

e) Bird of Prey Nesting Platform- Still in proposal stage, and future plans are not yet known, but the maintenance is estimated to be similar to the California Wren (with a longer time span between when the nest site would be cleared, and the maintenance of removing any bee or yellow jacket hives from the platform.

f) Bird Pebble Habitat- Still in proposal stage, but the implementation process would not take much planning or effort. Simply adding smaller stones to the roof of the science center would be adequate to support the nesting circumstances necessary to allow for birds that nest in pebbles to nest atop the science center. As of now there would be no maintenance predicted for this project.

a)  Bee Hotels- Have already been proposed and constructed, and the maintenance of these hotels involves minimum effort, and replacing damaged ones would require minimum costs and the time spent constructing these hotels would be minimum. 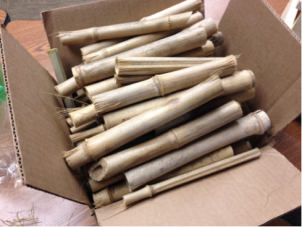 b) Solitary Bee Houses- Projected plans for more bee hives and hotels for the future are in the making, and costs are not yet estimated. However, the costs, maintenance, and construction of these is estimated to be low.

c) Other insect housing- There are project proposals for lady bug homes and other insect homes being developed as well, and the process is still in the beginning stages.

3. Bat Boxes- This project is completed, and boxes have been installed at  the SLUs, the Tree House, and this SLU is burdened with the task of maintaining the boxes. The boxes are designed to be maintenance-free, but they are susceptible to wasp nest, which need to be removed professionally. In the plans, it also mentioned that if the houses were not in use after 3 summers they would be moved.

4. Squirrel Dens- There is talk about future project and plans for the addition of squirrel dens across campus.

5. Salamander Swamp- This project was a student Theory-into-Practice Project, and it was part of an ongoing project to clean up the salamander swamp and to help remove invasive plants to allow for the creation of salamander “houses.” This project maintenance involves keeping the swamp clear of trash and pollutants, and presents the further development of the swamp from an accidental habitat to a real habitat. 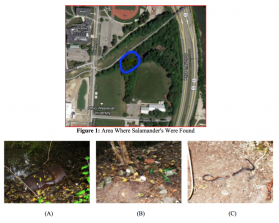 6. Retention Pond- Is currently in the last few stages of planning and acquiring native plants to be planted in designated rain gardens, to catch and filter run off water and also create native habitat for birds and other wildlife. Maintenance is expected to be minimum to none existent at times due to the plants being able to come back each year, and being that they are native will grow without the use of fertilizers.

7. Restore Delaware Run- This project has been multi semesters already, and is going to need work throughout a few more semesters before it can be implemented. So far students have gathered a list of plants and tree species that are native and can help restore the run, and allow for the soils to be restored to their natural state. Six signs have been installed along the Delaware Run to allow for the general public to become more aware of the Olentangy watershed, and what tributaries are involved in feeding the Olentangy (Delaware Run being one of those). 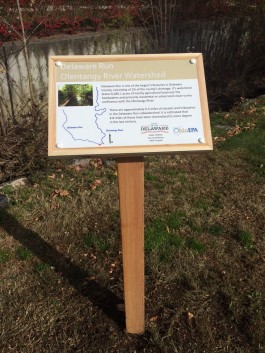 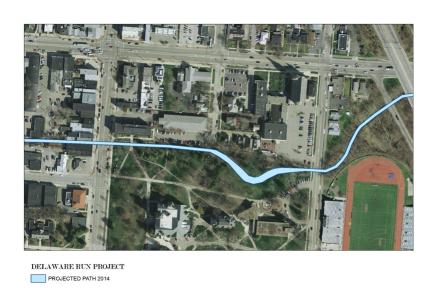 Week 5: Wednesday February 10:Bruckner: The Fanaticism of the Apocalypse: Save the Earth, Punish Human Beings

Cronon “The Trouble with Wilderness” and Sullivan The Meadowlands

The discussion in these two books over the true measure of “wilderness” and the place of humans and human things in consideration with nature. The common theme between both of these books revolves around this idea that humans are both separate from nature and ‘wilderness,’ and yet innately intertwined with it simultaneously. The argument that Sullivan makes through his book captures this meaning of nature in a way many people overlook. This idea that humans can be apart of nature, they can create a new kind of wilderness, and that wilderness is itself hard to define.

I particularly enjoyed the approach Sullivan had to the Meadowlands, the place itself, and how he was pulled back to this landscape of trash without really understanding what it was exactly that caught his imagination. The idea that this landscape of trash offered just as many discoveries, adventures, and sights as national parks I found to be interesting. I am a one of those individuals who idealizes nature and wilderness, and prefers the both without human impact. However, when people live in harmony with the environment, and instead of destroying it choose to live along side it I find it compelling to do the same.

Cronon’s approach to this concept of wilderness as he recaps the history of the word, and discusses the many connotations associated with the ‘wilderness’ throughout history. It is amazing to see how humans went from seeing wilderness as this dark, mysterious, dangerous, and scary place to now considering it to be majestic, beautiful, peaceful, and serine place. 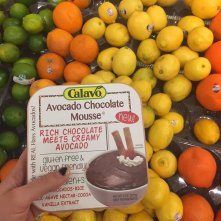 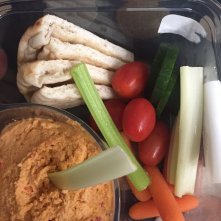 If you would like further instructions, here is the link: http://minimalistbaker.com/chocolate-peanut-butter-avocado-pudding/

-Future SIP proposals for ‘Homelessness in the Urban Environment’