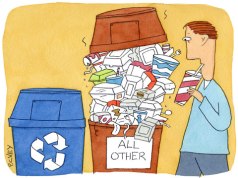 Originally, I was looking into alumni to cover the cost of replacing the dishwasher, which was approximately 80,000. This was a difficult feat. I discovered it was difficult to find someone to fund something that isn’t easy to name after them. Therefore, with the help of Buildings and Grounds I was able to see the waste of the current dishwasher. They then did calculations to see how much money was wasted based on the lack of efficiency. The money being lost through water and electricity was enough to cover the cost of the lease for a new dishwasher. With the University saying that they would install the dishwasher over the Summer 2015 I changed my direction of the project to eco-containters. There was some previous work done on the containers but was halted due to the dishwasher not being able to be upgraded. Dan Magee was able to give me previous details about cost and ordering. With this I created a proposal plan for cost and the product.

First, I looked into the different types of reusable containers. I found a company called Eco-containers that has previously worked with Universities on start up programs. This is when I found out that the Dan Magee had previously investigated this product. Therefore, I reached out to Dan to see what he had already collected on the materials and discussed with him his thoughts about how to implicate this product into Market Place. He and I both believed that totally eradication of the previous disposable to-go boxes was necessary for the eco-containers to be successful.

I then began to research the financial side of the product. I asked for current spending reports on the disposable to-go containers. With this I was able to figure out on average yearly costs as well how

many containers are being thrown away during a school year. I then researched the eco-containers and their life expectancy. Each eco container can be used approximately 500 times before needing to be recycled. Therefore, even thought the initial cost of the eco-contaniers is higher than that of the disposable containers they become cheaper in the long run as an investment.

Once I gained the help and support of Chartwells I brought the eco-containers to WCSA asking for their support and potential funding. WCSA was receptive as a whole and was able to help write letters to the Vp of Finance expressing their support of the project. They too agreed that the eco-containers had to be an all or nothing kind of approach. They were interested in the logistics of how the containers would be returned and what the proper incentive would be to return the containers. Eventually, the hope would be to incorporate the bar code that each box has on the back. However, to do that the school would need to update the registers. Each box would also have a logo on it depicting how the presses works and where they can be filled and returned.

This entry was posted on Friday, May 8th, 2015 at 4:26 pm and is filed under Uncategorized. You can follow any responses to this entry through the RSS 2.0 feed. You can leave a response, or trackback from your own site.