To be honest, the second half of the book wasn’t as good as the first half of the book. The second half started talking about the geographies of animal parts and about the first animal welfare legislation at the turn of the 19th century in England, Royal Society for the Prevention of Cruelty to Animals (RSPCA). The interactions of farmworkers and farm animals were talked about and how farmers felt like the only power that they had was over the animals and the powerlessness over human that they were feeling resulted in violence towards the animals.

We are accustomed to how we prepare our food today and how it is prepared. It hasn’t always been like it is now and the process of accessing water and food, the ability to protect and control a herd of animals, and breeding practices have changed dramatically. Post WWII period, the Western world changed the way animals were raised. With improvement in industrial technology, more animals were able to be confined in smaller living quarters, medicine was made to keep the animals from getting sick, and breeding was done that allowed for larger scale production. This led to what we have already talked about before, factory farms and how the mistreatment of animals in these farms have caused worldwide discussions about the mistreatment of the animals in the farms. We have really only talked about farms in these factory farms, but there are other animals as well. The bear for example is also used for their bile that the Chinese have been using in their medicine for thousands of years. Bears are the only mammal to produce ursodeoxycholic acid (UDCA), and demands for it are high, even though it can be produced synthetically now. China is actually the highest number of farmed bears today. As well as having the most bred tigers in their tiger farms, which is more than all the members of the six subspecies combined still in the wild.

Millions of animals are being kept on fur farms in North America, Europe, and Russia and are kept alive long enough to use their pelts for fashion. Animals are electrocuted so the coat is not ruined, which is wrong, especially since after all the talk about the mistreatment of animals. 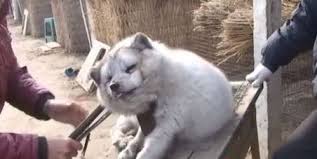 Fox struggling before being electrocuted for its fur.

To know how they mistreat animals just to get their fur is wrong in so many ways. In the book they actually talked about how many animals that need to be killed just to make one fur coat. Here are just a coupe of the numbers, at least 55 wild mink, 35 ranched mink, 40 sables, 11 lynx, 18 red foxes, 11 silver foxes, or 100 chinchillas. Just these numbers alone surprised and upset me to realize how many innocent animals they kill just for a fashion statement.

This entry was posted on Tuesday, March 31st, 2015 at 7:34 pm and is filed under Readings. You can follow any responses to this entry through the RSS 2.0 feed. You can leave a response, or trackback from your own site.