“Corals are non-selective feeders and our results show that they can consume microplastics when the plastics are present in seawater.” Researchers have found that corals found on the Great Barrier Reef will eat micro-plastic pollution. Researchers aimed to determine whether the corals from inland reefs consumed microplastics and whether there is a potential for plastic pollution to affect the coral reefs. They performed a study by taking parts of a coral reef and putting them into plastic contaminated water. They found that after two nights in the water, the coral had eaten plastic particles. As well as, that the corals ate plastic at rates only slightly lower than their normal rate of feeding on marine plankton. Dr. Hoogenboom, one of the leaders in the research said that they will also test to see if fish that live on the reef eat plastic particles too, and if they do, does it impact the fish’s growth and survival. 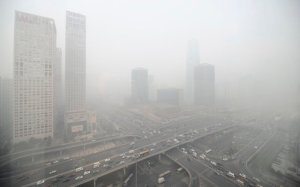 Bring your own oxygen tank if you plan to visit China in the next 15 years. In a recent air-pollution test conducted by the Ministry of Environmental Protection only 8 out of the 74 cities that were tested met the national standard. The consequences of China’s massive economic and population growth have now begun to reveal themselves. The migration of rural populations to the city to scoop up urban-industrial jobs is only fueling the fire of foreign investment by western nations. Although the country declared a war on “air pollution”, Biejing still has 93 micrograms of particulate matter per cubic meter, three times the national standard. Hopefully the growth of China’s environmental sector will help the cloudy nation develop a few solutions to combat the filthy air and its consequences.

Overall, I am really enjoying the way this book is written and organized. When reading section one chapter 5, Environmental ethics. The picture on the first page reminded me of a film I had to watch in Bioethics. The methods in which the animals were killed and kept were absolutely discussing. This leads me into the next topic of the chapter which is factory farms. I have always been discussed by the idea of factory farms but after reading Eating Animals I have become more interested in them and ways to avoid contributing to them. I feel sad thinking that industrial efficiency is what is considered most important. I understand that the price of meat dropping is a positive because allows more people to eat it. e.g Meet is not just for the elite. But, is the quality of the meat worth it? Also I have issues with the environmental problems brought up by the factor farms and the lack of care being demonstrated.

My ethical concerns about factory farming do not stop with the treatment of the animals or effects on the environment. I am also concerned about the lack of concerns for people. What the effects of cheap meat might be doing to people. I think the industry is more concerned about making money than the long term effects on people, animals, or the environment. I have looked into the waste pools produces by the factory farming. At a small scale waste it reincorporated into the environment 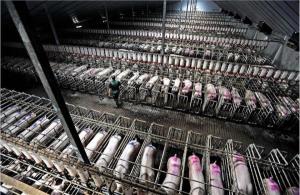 Another issue with factory farming is the carbon omissions, a topic discussed at the beginning of chapter 4. Instead of finding ways to “suck” the current carbon out of the atmosphere we should be focusing on ways to cut down on adding more carbon to the environment. Cutting back on factory farming would decrease carbon emissions. However, doing so would cause the cost of meat to increase. Yet, is that a bad thing? Potentially, instead of thinking it is a good thing meat is cheap maybe a better plan would be to work on education so that the average income is higher. I don’t think people should be lied to about that they are eating. At the grocery store everything is a false advertisement. Overall, I am excited to read the rest of the book. It is able to present facts and leads me to think in ways I haven’t before.

Still waiting on dishwasher costs from Gene. I have found my own figures but I want to be able to see what they have already proposed. I have found the reusable containers mentioned in previous proposals. Costs are still in the works and figuring out whether a dishwasher is possible is the first concern. I have some information. Also looking at avoiding a remodel. Coming up with return methods that don’t involve changing the kitchen set up in Hamwil.

Reflections on Robbins et. al. Environment and Society Part I.

Environment and Society written by Robbins et al was a fairly comprehensive textbook style book that provided chapters of information in a fairly easily read format. I appreciated this text’s use of vocabulary boxes, blurbs for more thought, and questions at the end of each chapter. The book briefly discussed many of the most important topics in society’s environmental history, some of which I’d learned plenty about in other classes, and others which I’m interested in discussing further.

“Overpopulation, as this logic goes, is inevitable without some form of enforcement mechanism” (53)

These ideas are still provoking for me – it’s not enough to hope that everyone will suddenly become compassionate and respect the Earth, there must be laws and costs for enforcing standards that we know are necessary to sustain the Earth, even if they are contradictory to the needs or desires of individuals.

Conservation: the management of a resource or system to sustain its productivity over time, typically associated with scientific management of collective goods like fisheries or forests

Preservation: the management of a resource or environment for protection and preservation, typically for its own sake, as in wilderness preservation

Passed overwhelmingly in 1973- regulatory protection, USFWS “designs and implements” a recovery plan for the species. “ESA prohibits the federal government form taking any action that would further jeopardize listed species” and “prohibits the killing or harming of listed species on all lands, whether publicly or privately owned” – super controversial, some say it has a low “success rate” – but also few animals have actually gone extinct since its institution.

Once the newest expansion of the Panama Canal is completed in 2016, the new dimensions of the waterway will be able to accommodate much larger ships and researchers predict that ports along the Gulf and East Coast will now deal with 25 percent of the ship traffic that goes to the West Coast. Unfortunately, scientists fear that accompanying these large ships on their voyage will be more invasive species to these areas such as the zebra muscle and Asian shore crab. Because of this increased risk, new regulations must be put in place to prevent the threat of invasive organisms.

It’s strange to be reading a textbook-style book for this class after getting to read so many personal narratives but I like that Nature and Society: A Critical Introduction is so easy to read and understand.

In particular, I really enjoyed chapter 5 which focused on Environmental Ethics, specifically, animal ethics. Whenever discussing issues regarding animal testing I think of Peter Singer. In high school I took an ethics course and learned about the modern philosopher Peter Singer and his radical thoughts on the subject. It’s only fitting that his name should pop up here. 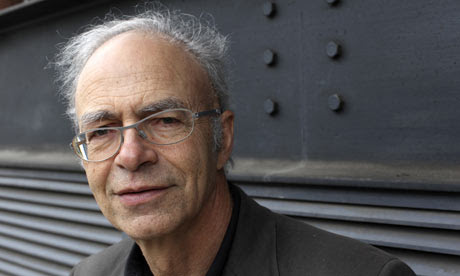 Singer is a Princeton philosopher whose book, Animal Liberation, is regarded by many people as the “bible” of the modern animal welfare movement. In it, he argues that the interests of animals should be considered because of their ability to feel suffering and that the idea of rights was not necessary in order to consider them. He introduced and popularized the term “speciesism” in the book, which describes the exploitative treatment of animals.

He used to be strictly against animal testing but in a recent article he admits that has accepted that animal experimentation is sometimes justified. For more on this article, go to http://www.bbc.co.uk/blogs/legacy/ni/2006/11/peter_singer_defends_animal_ex.html

One thing that pertains to this book though it Singer’s opinion of American agriculture. He called Western-style meat production cruel, unhealthy and damaging to the ecosystem. He rejects the idea that the method was necessary to meet the population’s increasing demand, explaining that animals have to eat food grown explicitly for them, and they burn up most of the food’s energy just to breathe and keep their bodies warm.

In chapter 5 of Environmental Ethics this topic is explored. Factory farms are examined as well as other practices. One debatable issue is who (or what) deserves moral standing (75). I think this is the core of animal issues and I’m excited to discuss this in class.

So far I have found the first part of Environment and Society book offers many new insights into some of the leading topics we have discussed thus far relating to the environment. The book began by defining and meaning of nature—a common theme in almost every book we have read so far in the semester (The Meadowland, Nature, Desert Solitaire). It argued that nothing is really untouched and pristine; the nature we see around us is all constructed and has been changed by humans. The concept of wilderness as untouched by humans is a solely western social concept; most other cultures do not even have a word for such a place because it does not exist. I found this rather surprising so i did some research and it appears that it is a western concept only

You Can’t Translate the Word “Wilderness”

But, what I think is the main focus of the first half of this book was that there is only a finite amount of resources on the earth, and with our rapidly growing population, resources are growing scarcer, which will eventually lead us to reach a limit of expansion. With our current exponential growth we cannot keep up with food production. The land has a certain carrying capacity, which is the amount of life that it can support. This theory is countered at the end of the chapter by the argument that population growth and even crisis’s are the root of human innovation and civilization. Food production increased when there was more of a demand for it so people had to come up with ways to produce more crops, this evolution of new agricultural methods is what allowed for the birth and spread of civilization.